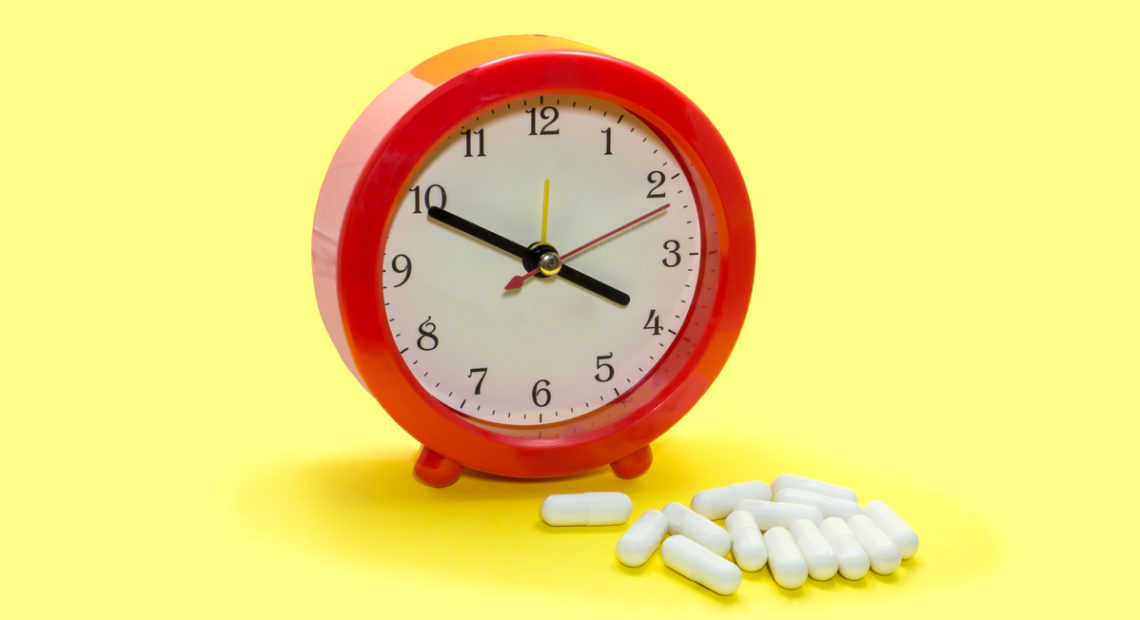 The question is simple: “why do some medicine have times to be taken and others don’t?”

As usual, the answer is not so easy. There are two important concepts to take into consideration when talking about medicine: pharmacokinetics and pharmacodynamics. The first deals with the amount of time that a medicine spends in our body. The second deals with its effects.

Let’s start by pharmacodynamics: there are several medicine with different functions. Besides its main function, we also have to consider all the secondary effects that might occur. This means that a medicine for a specific situation can have an effect that might influence directly the choice of time to be taken. The most classic example is the antihistamines used for allergies which, due to common effect of drowsiness, should be taken at night before sleeping.

Another example are some anti-depressants which, on the other hand, usually keep you awake, therefore should be taken in the morning.

Why is it important to take these factors into account? Because not everybody leads the same lives nor take the same medicine. For instance, let’s imagine a taxi driver who has allergies and works at night. It’s strongly advised that he does not take the antihistamine at night, before going to work. Or someone who is depressed and taking anti-depressants that, accidentally and the opposite of what is usual, cause drowsiness: it wouldn’t be advisable to take it in the morning.

Conclusion about pharmacodynamics: due to the specific effects of each medicine, its taking might be indicated for a certain time of day, so that it best influences the healthy daily life of the patient.

Let’s pass on to pharmacokinetics: each medicine goes through 4 processes when taken: absorption, distribution, metabolization, and elimination. What results from this is that the medicine gradually enters the blood stream and begins to be eliminated from our body. The speed at which each step occurs is determined by the medicine characteristics, by the state of our body, and by several other factors.

Now it’s necessary to take into account what is the efficient dosage: that is, the amount of medicine necessary to achieve the desired effect, minimizing the undesired secondary effects.

Let’s consider taking an antibiotic to treat an infection. Someone takes an antibiotic, its concentration in the bloodstream increases, and also starts to be immediately eliminated by the body (in the kidneys and liver). When the absorption begins to be slower than the elimination, the concentration of the medicine in the blood starts to diminish, as if we were climbing a mountain and going down right after. The efficient dosage is like the mountain’s summit, the area covered in snow. Much above that we would be having harmful effects, and much lower than that prevents the antibiotic from killing the bacteria it has to kill.

The time of taking the medicine is calculated based on this type of thinking. Thus, to prevent the blood concentration to go under the efficient dosage, a new taking of medicine is administered at the right time, which causes the concentration to rise again and stay within the efficient dosage, without going above. Only this way are we able to keep the disease under control (and in this case, kill the bacteria responsible for the infection).

It is important to mention that this thinking is applied to ALL medicine, and the different results of each pharmacodynamics and pharmacokinetics evaluation are listed in the information necessary to sell them.

The result of this is that there are some medicines where there is not much problem in being taken at not very rigid times, and others whose times are essential to have an effect.

I would like to end with a small parenthesis which deals with one of the very few situations (if not the only one) in which the medicine times can be considered second place:

There is a curious situation that occurs when one talks about “adherence to therapy, that is, how compliant the patient really is in taking his medicines. It is found that with certain medicines and certain people (particularly older people), it is sometimes more beneficial to change the ideal time of a given drug to a “suboptimal” schedule to avoid the person from not taking the drug at all (usually by forgetting).
In these situations (and also in any others!), it’s very useful to talk with the pharmacist, the nurse, or the doctor, so that they can devise together a strategy that allows the minimization of error associated with this small “transgression”.

Brush, Elixir or Dental thread. What is the right order?