A father, the baby, the soups, and the baby food…

Five months just completed, it’s time for our baby to start tasting new foods. We wanted to give her breast milk exclusively until she was six months old… but it was not possible because, besides the mother having to return to work, our daughter always refused the baby bottle.

We tried all the “tricks” so that she would accept the baby bottle with breast milk:

Warm, scalded, frozen, and just extracted milk. We experimented with different baby bottles and a panoply of teats passed through the sterilizer. Different places, with the mother, the father, the grandmother, the grandfather and the neighbor. Only the cat was missing, all in vain, because… no baby bottle!

All the useless efforts anticipated that the next step would be gloomy… But, “we rolled up our sleeves,” we went ahead without hesitation and “studied” the indications of the pediatrician.

As with all parents, we want the best for our baby and so we choose foods that have an organic origin, preferably. Nowadays, due to the increase in demand for this type of food, the supply is bigger and more and more accessible.

We started with the potato soup, carrot and raw olive oil. Regarding fruit, we gave her pear or boiled apple.

The food scheme we are following is based on the introduction of a new vegetable or fruit per week, so that we can check potential joys and food intolerances.

Two days after the introduction of the soup, my daughter started to have difficulty in pooping. We talked to the pediatrician, who suggested:

Change the quantities of the food but keep the order of the proposal. If that did not solve it, he recommended a health product to restore the normal functioning of the intestines. The situation normalized and everything seemed perfect. 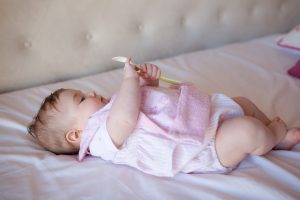 She ate the soup and the fruit very well. Although we noticed that she was satisfied after eating, we thought about increasing the nutritional value of the meals. As the food was poor in fiber, we decided to introduce the unpeeled zucchini, because it would also improve the intestinal transit. This “idea” resulted in an episode of diarrhea … and was immediately abandoned!

Two to three weeks passed, and we introduced a new meal: the baby food.

Once again concerned about the best for the baby, we chose an option with no added sugars and organic.

This meal is prepared with breast milk and sometimes we add fruit because she also likes it.

One month after the introduction of the soup, we began to prepare it with meat. And so far it’s her favorite dish!

If you have any doubts, please contact your pharmacist 😉

I’ve got such a heartburn…